Jo Lankester, Message to the Living, Linocut, Artisans on Flinders

Posted by Jo Lankester at 7:09 PM No comments:

Window Display of Prints and Greeting Cards at Artisans on Flinders

Posted by Jo Lankester at 12:04 PM No comments:

Wing Tip Vortice by Michelle Hall & Jo Lankester was on display at Cell Artspace Cairns, from 3 August until 31 August 2013.
Michelle & I hit the road at 4.30 am Saturday 3 August for a 5 hour road trip to Cairns to install Wing Tip Vortice at Cell Art Space.  The previous day we organised with Pack & Send Townsville to make a traveling cardboard crate to transport the Wings to Cairns. The box was 2m L x 85cm W x 45cm H. Pack & Send provided strapping to go around the width of the box to keep the lid contained. Michelle and I were very proud of our traveling crate and commented how sexy our box looked.

Carefully packing the artworks made of etchings printed on vintage pattern paper, bamboo sticks and wall paper paste, into the box we then strapped the box to the roof of my car. This is where the calamity, now comedy, begins. On the drive home I kept saying to myself remember the box on the roof, remember the box on the roof, it soon became a mantra. I pulled into the driveway stopping before entering under the house as the car would not fit with the box strapped to the roof.

I then received a text from one of my colleagues at Artisans on Flinders informing me of all the sales for that day, and being a Friday evening I knew I would have to restock the shop for the weekend as Sunday is one of our busiest days with the Cotters Markets. After a short stop at home I got back in the car at 6pm and started repeating the mantra ‘remember the box on the roof’, in hind sight I should have taken the box off and left it at home. I spent the next 3 hours restocking the shop and proceeded home remembering the box on the rook right up until I pass my house and pull into the driveway. There’s my son rushing to the gate to help me in, I spot a cigarette in his hand and loose my train of thought yelling what’s that in your hand, you know I don’t want to see you smoking’ I’m saying this as I pull in the drive way and crunch the sexy box into the raised garage door!
I quickly reverse the car and jump out hyperventilating. My world just imploded as I thought I had destroyed the artwork that was to be installed in Cairns the following day. Holden was great; he kept telling me to calm down and helped me take the box off the rook to inspect the damage. To my great relief and surprise the artwork was not damaged the box and artwork just lifted and changed shape. I cannot express my relief in words. Holden helped me mend the box and repack the work. He even got up at 4am to help strap the box back onto the car roof. Thank you, Holden.

I pick Michelle up from her house and begin our road trip to Cairns, I told her my horror story of the night before and she took it well, we had a little laugh but it was pure tension release on my behalf and relived that she took it well. 2 hrs down the road as the sun started to rise we were driving through Cardwell. We pulled over for a toilet break.  Along the way we had some light rain and at that point thought it would have been a good idea to wrap the box in plastic in case of rain. The rain wasn’t too heavy and we convinced ourselves that the box would be fine. When we go out of the car we saw that the lid of the box had lifted to where one of the straps was exposing the artwork to both wind and rain. You can image the disastrous thoughts running though my head. Mind you we pulled up in front of a tool box talk for the roadwork crew which was a bit intimidating to say the least. We took our box off the roof and inspected the damage. Once again there was no damage to the artwork. The wind had shifted the artworks to the back of the box compacting the wings to sit flat. There were quite a few bugs in there but no damage. FEW!
After re-strapping the box length ways to prevent the lid lifting again, we took off to Cairns and still in front of the road crew which meant no lengthy stops along the way.  We arrived ½ an hour before install at 10am.

We would like to thank Townsville City Council for supporting our project through the Grants for Excellence in Cultural Development in assisting us in making this exhibition possible, and to Cell Art Space for proving Michelle and I with the opportunity to grow our audience outside of Townsville.

We would also like to thank Sammy for demounting the exhibition and returning the not so sexy box to us in Townsville. X 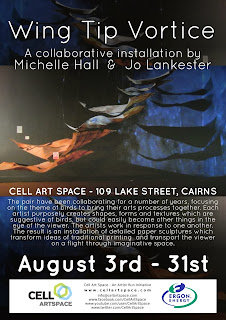 Posted by Jo Lankester at 11:46 AM No comments: